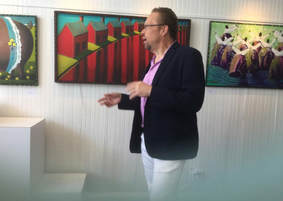 ​Personal story: As a visionary folk artist, Danny’s paintings stretch the boundaries of realism in his mastery of color, texture, and pattern. Many of his new works have a rich abstract quality that tell his remarkable story.
​Danny lives on the Eastern Shore of Virginia, where he grew up. However, his work has shown and been appreciated throughout the country for several decades. Primarily known on the east coast, Danny is well recognized for his visionary use of acrylic paint to tell his unique story. His Gallery, Studio, and Gift Shop are in Onancock, Virginia. The gallery provides a beautiful historic space to showcase his larger work all of which is for sale.

1. How do you describe your art?

This drives me nuts — there are some people who are so educated who don’t understand visionary art. There is nothing that I create that’s real. It is not a place. It is not a person. It is just me triggering things in people, in emotions.
I took lessons from art teachers here on the Shore but it wasn’t who I was. It was traditionally driven — it was nothing to do with where I was coming from or what my life situation was. My work was so much more than just “I want to be an artist.”
I have several people who ask my philosophy of how I approach my work because it is so different from a typical artist — when I say “typical,” I don’t mean it in a demeaning way.
I am so self-taught. I used to think, “Oh my God, I need to be validated as an artist.” Now life has come to me and challenged me and brought me to my knees, and at times, there was no light.
My work is so layered. It is a really huge spiritual foundation first. It is a community foundation.

​I was born in 1960 in Nassawadox. My mother was a 15-year-old and she thought she knew it all. The funny part of it is that my mother’s family is very wealthy and very educated.
Then she married a waterman from Hog Island, and when she did — at 15 — they all just disowned her. And when they disowned her, they disowned me (and) my brother. We were just written off.
I grew up really, really super poor. We lived in a two-room-up, two-room-down old waterman’s home right on the creek in Willis Wharf with no running water. We just had a pump and an outdoor toilet. It was all very basic — and not “good basic.”
I tell people all the time, even before you draw your first breath of air, you’ve inherited a lifetime of things — how your family is seen in society, what they have, what they don’t have, their education, where they live — that you have no control over. But you inherit that.

​A couple of things in my life were different, which I struggle with today. The mental, physical and sexual abuse was so rampant and so over the top. When I started school I was ostracized in a sence because, little did they know, I have severe dyslexia.
On top of my learning disability, I grew up with generational addiction, alcoholism, severe dysfunction and just layers and layers of things. I became an amazing actor in trying to make my way through these crazy ailments.
I did not know what “Main Street, America” was — that sounds so bizarre. I had no point of reference to what normal was.
I went to visual things because of my learning disability and my life. I did not know how to survive the family unit I was born in because there was abuse on every level. (Painting) was used as a tool to lose myself in a world I created, to live in a world that had all the things I did not have but so desperately wanted.

​4. What happened to your family?

​My father had a fish market and peddled fish from the bridge to the Maryland line. My mom really kind of lost it. She came from a Norman Rockwell life but she was married at 15 and then had my brother and me. And my father was a brilliant man, but his demons were just so immense.
I’m the only survivor. My only brother hung himself over a bedroom door. I’ve lost six cousins to suicide. My mom’s dead, my father’s dead, everyone’s dead — aunts, uncles.

​5. When was your first art exhibition?

​I did my first professional art show on the Eastern Shore — I was a member of the Art League — on the grounds of the Hotel Wachapreague in 1976. I was 16 years old.
But it is so much more than that — that’s the piece that people get misguided by.
I’m not that “Tuesday morning artist.” I’m not that “I love to paint, I like to draw” artist, and I’m not belittling that at all.
I was looking for that “thing” in my art. I mimicked. I was never true because I felt like I had to paint boats and stuff because that’s what my dad liked.
I was already struggling to just be me in a world that ripped my childhood away, ripped my adolescence away, ripped away my complete progression from childhood throughout life.

​6. How has your difficult childhood produced such peaceful art?

​When I create, I lose myself in my work, and it’s the God’s truth — and He knows it — I get peace. It’s kind of what takes me out of reality and puts me in the divine. It is my salvation. It is my everything.
And it was an outlet for me to create a world that I’d never have.
I had some great doctors at Johns Hopkins and they read an article on me. The last time I was up there, the doctor asked me if I would stand up — I thought they were going to give me another test. They said, “Take a bow. We don’t know how you’re alive.”

​7. Your work features exclusively African-American women and children. Talk about their significance to your art.

​That was the environment I grew up in — the culture of black women. I was in their lives, in the grit and the glory. It wasn’t like, “I was privileged and mother and father had them take care of me.” It is what they did for me, what they brought to my life.
They were the women who inspired me. They gave me so much. I thought that’s what they deserved (to be in paintings). When I looked at them, they were as close to God as I would ever get.
Some people say, “Why do you feel like you know what the black experience is?” I say, “No, no, you’re on the wrong road.”
I know the ones who helped me so much — what they had to go home to was even harder than what I had. I felt that kindred spirit.

​In 14 months I lost my whole family and then I divorced and I had an opportunity from a woman from Wales up in Cambridge, Md., who had a gallery.
She’d been begging me for five years to come up. But with all of that happening, I said to myself, maybe it might be a good thing just to get away for a bit. I was in Cambridge for five years.
I was doing a huge mural for a client and I was on a scissor jack, and I was coming down and I walked backwards and fell and crushed five of my vertebrae from my skull to my shoulders and I was almost paralyzed from the neck down.
Nobody would touch me except for a group that operated on Christopher Reeve at U.Va. hospital. I was out there for about two months and they put me back together. They were brilliant and they saved me.
I was up there and I was completely by myself and also my son — I just need to be close to him. He’s all I have. I would go up there and cry the whole way there.

​Back in the fall the dean from the Batten School of Leadership and Public Policy at U.Va. and his wife came to the Shore looking for property and they wound up buying a painting and fell in love with my work.
They asked if I would come talk to the Batten school and the Batten school community. I’m doing two lectures and two exhibitions on Feb. 19 — one will just be for the Batten community and students and the other will be for the entire campus.
I also am going to an art show that I helped start 17 years ago. It is an amazing show in Chatham County, North Carolina, right outside of Chapel Hill. You have people from all over the world.
I have sold tons of work all over Europe just from that show.

​10. How do you feel about the many admirers of your work?

​I feel like I am so blessed. I have so many people who ‘get it.’ I get handwritten notes and cards and letters every day.
There is so much more that binds us than separates us. Even if your life is totally different, there is a thread of humanity that runs through all of us that binds us on some level.

Would you like to buy a painting, have any questions, care to schedule a meeting with the Artist Studio and Gallery, or care to join mailing list for upcoming special events?